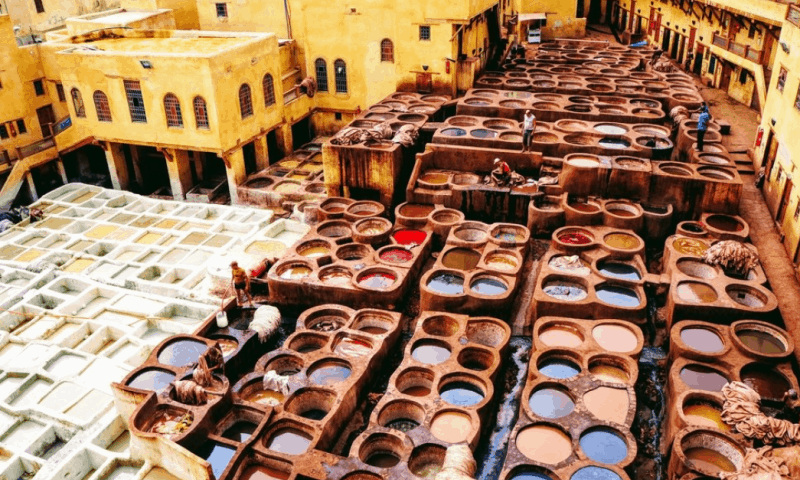 Fez Guided Tour in Morocco is famous for its medina (old city) known as Fes-al-Bali. It was founded in the ninth century and is a UNESCO World Heritage site encircled by an eight-kilometre wall. Visiting the medina is an unforgettable experience as it has changed little since mediaeval times. The streets are narrow and free of cars and there are many souks selling produce from all over Morocco.

The majority of the things to do in Fez are within its walls and joining a tour or hiring a guide is advisable, as visitors often get lost inside the medina.

Shopping is a fantastic experience inside the medina as there are many souks (markets) where visitors can purchase handicrafts, rugs, pottery, antiques, traditional Moroccan clothing, Jewellery, tea, spices and just about anything else. It is easy to spend a whole day wandering around the souks.

In June each year Fez holds the Fez Sacred Music Festival, where musicians from all over the world play traditional music originating from their particular cultures. The festival has Sufi chants, Pakistani Qawwali music, Egyptian Madhi odes, flamenco music and much more. Furthermore, there are Whirling Dervishes from Turkey dancing at the festival and at the finale all the musicians perform a fusion of different styles of music together Casablanca To Chefchaouen. Every year in April Fez the Fez Festival of Sufi Culture is held in the city. It has a program of Sufi music and chanting as well as dance performances and lectures about Sufism.

There is no shortage of places to eat traditional Moroccan cuisine in the city and the famous Tagine, and couscous dishes are very delicious. A Tajine is a type of traditional stew where food is cooked slowly in a clay tagine pot placed at low temperatures. This delicious dish is made from vegetables, fruits and meat. Spices in this dish include, Cinnamon, ginger, cumin and Saffron. Couscous is a staple in North Africa and made from semolina. The couscous is piled onto a plate and covered in a vegetable stew. It is usually served with either lamb or chicken.

What you should see in Fez

The Karaouine Mosque is the most important Islamic building in the medina. Non-Muslims are not allowed to enter but the many religious schools that are around the mosque can be visited by anyone. The 14th century Attarin Madrasa is the most famous school with its beautiful Islamic architecture.

Morocco is famous for its soft leather and visitors can watch the process of leather dying at the tanner’s quarter in the medina. A guide must accompany them in order to enter the tanneries, which can smell rather unpleasant due to pigeon droppings being used during the curing process.

On a hillside, north of the Medina, visitors will find the Merinid Tombs. These are the ruins of the graves of a Moroccan dynasty dating back to mediaeval times. The ruins of the palace and necropolis are close by and there are lovely views out over the city making for a fantastic place to spend a few hours.